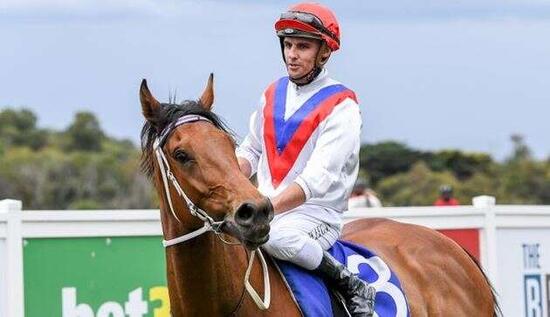 Julie Scott will be keeping an eye on the weather forecast before committing to chasing more VOBIS dollars with improving four-year-old Wicklow Town.

Wicklow Town is an intended acceptor for the $150,000 VOBIS Gold Bullion (1400m) at Pakenham on Saturday but Scott will only run the horse if track conditions suit.

"He requires a track with a bit of give in it and he won't be running if the track is not soft enough for him," Scott said.

Wicklow Town is a homebred out of Scott's four-time Melbourne winner Afterburn, who was runner-up behind Typhoon Tracy in the Group 3 Schweppervescence Trophy (1400m) at Flemington in March 2009 and notched all her city wins in the winter of 2008 on rain-affected tracks.

"We don't want to risk Wicklow Town on any hard tracks because we know he's much better when he gets his toe into the ground," Scott added.

Wicklow Town has won four of 12 starts, ending his three-year-old season with two seconds over 1400 metres at Caulfield, including a fighting effort behind the unbeaten Mystery Shot.

"He has a tendency to race a bit keen and after his first-up run this campaign (at Geelong) he went to the front and that brought back that bad habit, he's such a competitive horse and we've been trying to get him to settle," Scott said.

"The other day at Kilmore he wasn't too bad but Billy (Egan) did say he wanted to get charging a little bit."

Egan retains the ride on Wicklow Town for Saturday's VOBIS Gold Bullion, which is restricted to VOBIS Gold-eligible horses aged four and older. He has won $168,078 in prizemoney, including $47,615 in VOBIS bonuses.

Scott, who has trained since 1980, has 10 horses in her stable and is assisted by her son James Matthews, who was stable foreman at Carbine Lodge for John Hawkes.

Scott was previously based at Bairnsdale, with her G2 winner Tesbury Jack one of the best sprinters to represent the Gippsland district over the past 20 years, before she relocated to Ballarat in mid-2015.

Afterburn is also the dam of Scott's unraced Ready For Victory two-year-old filly Brittas Bay, with an unnamed yearling by Sepoy also set to represent the stable in future years.