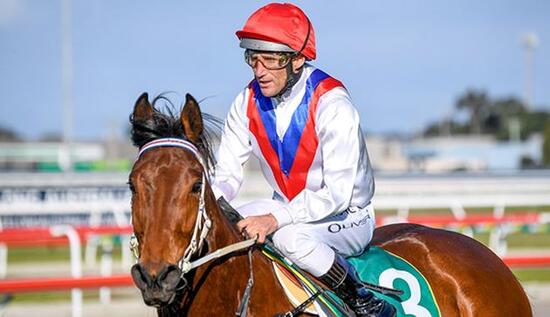 Champion jockey Damien Oliver has shown his faith in Wicklow Town to continue his winning form at Caulfield on Saturday, electing to stay with the three-year-old who is looking for his fourth-straight victory.

The multiple Melbourne Cup-winning rider partnered trainer Julie Scott's runner for the first time last start to victory at Geelong, and the Ballarat horsewoman is thrilled to have him back on board for Saturday's test.

"It's great to have Damien stick with him, we also had Craig Williams' manager inquire about the ride, so it shows the confidence they have in him at that level," Scott said.

"He's a bit of a tricky horse to ride, if he gets in front he pulls out and always has a think about it if he doesn't have something to chase.

"Last start he didn't win by much, but Damien said he actually did it very easily it's just that he makes it a bit tough for himself when he has too much of a think about it."

The son of Canford Cliffs has won three of his seven races and has markedly improved in his second preparation.

He'll step out to 1400m for the first time this preparation in Saturday's SUPER VOBIS 3YO Handicap.

"He would just lay in really badly in that first prep and now he's settling nice and his pattern is how we want it to be," Scott said.

"He had form behind horses like Russian Camelot and Themoonlightgambler at Ballarat but just couldn't settle.

"He loves the wet, so this is really the time for him to get some good chances and he meets them better at the weights than his last start, the 1400m won't be any problem.

"It would be fantastic if he was to win on Saturday, it would mean so much because he's a part of the family but as long as he runs a good race we'll be happy."

Wicklow Town is a homebred out of mare Afterburn, who Scott raced between 2006 and 2010 and still has on her property.

Scott has seven horses in her stable at the moment and has had her training licence since 1980, after being one of the first females to gain a professional jockeys' licence to ride against the males the year before.

Along with her son and assistant trainer James Matthews, who was stable foreman at Carbine Lodge for John Hawkes, Scott has trained at Ballarat for the past five years after relocating from Gippsland.

"I've trained winners at all the Victorian metropolitan tracks but not for a while so it would be great to see him run well this weekend, I don't send them to town unless I think they will perform," she said.