SOMETHING GRAND WINS HER MAIDEN AT BENDIGO 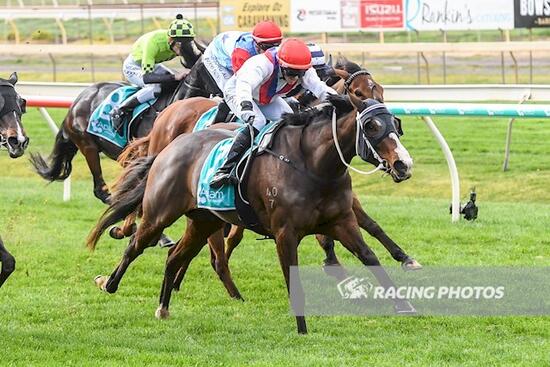 Something Grand broke her maiden at Bendigo second up stepping up to 1600 meters in the Bolton’s Office National Fillies and Mares Mdn Plate at her seventh start after having three placings. After jumping well jockey Neil Farley went forward to settle fourth with a trail three lengths from the leader Stern In Grinzing. Neil gave her a great ride hitting the front 150 meters out and kept going to win by neck from Jana in second and a further head from Rayelle in third.

Something Grand is a high maintenance  horse to train and it was a satisfying and great achievement from Julie and James to get this filly to the races and break her maiden in very good style. Great to repay Neil Farley with the win as he works hard for the stable doing track work.The ownership group which includes the breeder and long time client Mike Shannon and several that raced her dam Pass The Post who was trained by Julie to win six races including two in the city were rewarded for their patience.

Something Grand will have her next run at Sandown in a three year old fillies BM64 over 1600 meters.