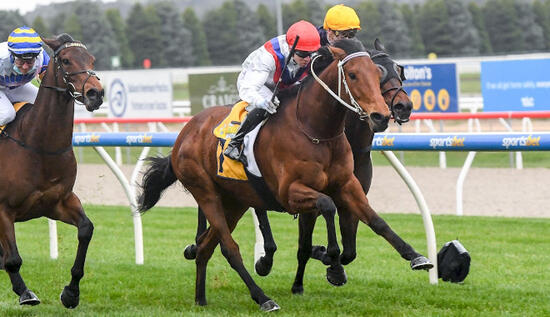 The $100,000 Sportsbet Gold Nugget (1600m) has stayed local in Ballarat and trainer Julie Scott is eyeing more hometown spoils after the win of Wicklow Town in the feature event on Sunday.

Guided to victory by Jye McNeil, the five-year-old showed his class and held off the challenge from an in-form Adelaide Ace.

With prizemoney doubled for the race this year, Scott is now eyeing off the Seymour Cup which has been transferred to Ballarat this year with a purse of $200,000 for the listed event on October 10.

“We just love this horse, we bred him and it’s been an absolute ride with him.

“I trained his Mum, I still have her and she’s still breeding and I gave her to my son and daughter-in-law to breed with and he worked at Blue Gum and that’s how they went to Canford Cliffs and the rest is history.

“We will just keep raising the bar and will probably have to run in something a bit better now.

“We thought if he could run well today and hopefully win, we might try the Seymour Cup it’s here and we thought we might try that.”
Wicklow Town has now won seven of his 23 starts and over $328,000 in prizemoney including metropolitan victories at Caulfield and Sandown this campaign.

Scott’s stable star hails from the dam Afterburn who was a seven-time winner for the stable. In the winter of 2014 she produced a winning sequence of four victories at Sandown, The Valley and Caulfield.

Afterburn has also produced Strike Action who was a four-time winner for the stable.

The dam has an unnamed colt by Sepoy and filly by National Defense on the ground and is in foal to Harry Angel.

Scott moved her Pagewood Racing stable from the Gippsland region to Ballarat in 2015 and enjoyed great success with Group 2 winning sprinter Tesbury Jack.

Article by Ben Sporle for Racing.com