CITY WINNING WICKLOW TOWN IS QUITE THE FAMILY HORSE 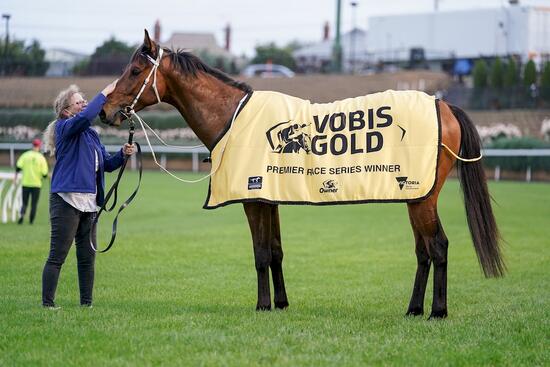 Wicklow Town’s victory in the 1500m VOBIS Gold Star at The Valley at Friday night’s Manikato meeting provided Ballarat trainer Julie Scott with her biggest win since the feats of her champion sprinter Tesbury Jack.

The five-year-old gelding is very much the family horse.

He was bred from a mare – Afterburn (Super Jet x Afters) – that Scott bred and raced to seven victories.

Scott bred twice from Afterburn and then gave her son Michael Matthews and his wife, Lisa, the mare to breed from and they were lucky enough to get Wicklow Town after putting the mare to Irish shuttle stallion Canford Cliffs when he was standing at Phil Campbell’s Blue Gum Farm at Euroa.

Matthew’s brother James is an assistant trainer to his mother, while wife Lisa is foreman for young trainer Mitch Freedman at Ballarat.

To keep the family involvement in racing complete, Michael is now the senior track supervisor at Ballarat Turf Club where he liaises with the trainers.

Wicklow Town’s 10 race campaign started in June at Mornington when the gelding was unplaced by since then has finished third at Caulfield, first at Caulfield, first at Sandown, first in the Gold Nugget at Ballarat, second in the listed Seymour Cup which was transferred to Ballart and then last Friday night’s win at The Valley.

“He is a tough horse and always tries his best,” Matthews said.

“It’s lovely and as an owner and the breeder it is probably the best race we have won, so it’s great.”

“The Gold Nugget was good because it was a feature race at our local track and it was always nice to win that one as well,” Matthews said.

In the Seymour Cup at Ballarat, Matthews said Wicklow Town was just beaten by a better horse on the day – Mr Brightside.

“That horse is favourite for a Group 1 (Kennedy Cantala) this week,” he said.

“There has been a lot of form out of the Seymour Cup. Just Folk (fifth in the Seymour Cup) won the Crystal Mile and the horse (Milton Park) that ran third won the Sale Cup on Sunday.”

Matthews said he was happy to breed from Afterburn while he was working at Blue Gum Farm.

“My mother gave me the mother of Wicklow Town, Afterburn (Super Jet x Afters) when she finished breeding as she only breed a couple out of her,” he said.

“Mum owned and raced her. She won four in town and ran second to Typhoon Tracy in a Group 3.

“I actually worked at Blue Gum for five or six years and was working on the stallions at the time and doing the mares and we finished up breeding the mare with Canford Cliffs.

“The stallion has done well but got written off pretty early in Australia as a lot of these shuttle stallions do, but they just needed time and he seems to have got a few handy horses these days.

“The first season he came out I did a foal share with the boss Phil and we sold that yearling. He had a few X-ray issues but we sold him and he only had a few starts and ran a couple of seconds and was placed in town in Adelaide.

“I would have bought Phil out at the sales if it wasn’t for the X-ray issues.

“We bred the mare to a couple of other stallions – War and Turffontein – as I got nominations as part of my wage there.”

“We then bred Wicklow Town by Canford Cliffs who was doing a really good job from his first crop. I sold my nomination in Turffontein and it helped fund the bills to get Wicklow Town.

“It turned it out well.

After Wicklow Town, Afterburn produced a colt (Scorch The Turf) by Turffontein) which won a maiden and then a filly (Brittas Bay) by Ready For Victory that is an unraced three-year-old.

“We have an unraced two-year-old by Sepoy and she has got a yearling by National Defence and she is in foal to Harry Angel and is due in two or three weeks,” Matthews said

Matthews said it was good to have the family involved in breeding horses, while his mother and brother have about 10 horses in work.

“It’s a family affair and it all works well,” he said. “Julie and James do all the training.”

Matthews and his wife Lisa also breed from another mare which they raced, Hospeda (Host x Play Mizzty For Me). The bought her as a tried horse as a three-year-old with one win already to her name.

Matthews raced the now 10-year-old with his wife and mother who trained her to another four wins.

“She was a tough mare and even though she only won in the country, we had a bit of fun with her,” he said.

“Her first foal is a yearling by National Defense and she is overdue and expected to foal any day to Magnus.

Hospeda has a booking with dual Group 1 winning Russian Camelot (Camelot x Lady Babooshka) after she foals to Magnus.

“A friend/client of ours (Brendan Ainsworth) raced Russian Camelot so we have done a share deal with him and we’ll race the resultant foal together,” he said.

“He is also in the Pagewood Racing Syndicate in Wicklow Town. He is a pretty lucky fellow and races Young Werther and hopefully he brings some more luck to our side.

“I started up the syndicate with a few friends and clients. They have got 20 per cent of Wicklow Town and my wife and I have got half and I gave mum 25 per cent and my brother five per cent.

“Obviously we are having a good ride with him.”

The horse is not far off reaching $500,000 in stakes and even though he is a five-year-old, Matthews believes the gelding will keep improving.

He said Wicklow Town used to lay in a lot but in his past few runs had become tractable and hadn’t over raced as much.

“He has learnt a lot this prep and has now gone out for a spell,” Matthews said.

“Hopefully he’ll come back and run first up in the sprint on VOBIS Day in April.

“The 1200m might be a bit short for him and then he’ll be aimed for the winter championship.

And Julie Scott admits Wicklow Town’s victory at The Valley was her biggest win since she trained champion sprinter Tesbury Jack which won listed races as well as the Group 2 International Sprint (1100m) at Caulfield.

She bred Afterburn, out of Afters, after being the successful tender for a service at a nicely priced service fee to Super Jet (Dayjur x Bear) which Steve and Ceri Jostlear imported from America to stand at their Ampulla Lodge stud at Bunyip.

Afterburn won seven races – including four in a row in Melbourne for Scott – as well as 11 seconds – who had bought the mare’s dam Afters (Snippets x Translantic) but was retired after two unimpressive starts.

While Afters produced seven foals, Afterburn was clearly the best.

After breeding two foals from Afterburn – the unraced Air Space (Hardspun) and four-time winner Strike Action (Street Boss), Scott decided she didn’t want to breed horses anymore and gave the mare to her son and daughter in law.

And so far it’s been an extremely successful family affair.